xTuple ERP 5.0.0-alpha and other components are now available

This release includes major changes to CRM functionality and the tax system, including integration with Avalara. There are significant changes to how CRM and tax data are stored in the database, so you may need to update customized scripts, reports, and MetaSQL queries. In addition, the deprecated portions of the Script Toolbox have been removed as previously announced, which may also require script updates.

Strict country checking is now required and how countries are stored in the database has been changed. Before upgrading to 5.0.0-alpha or later, you must install fixCountry 5.0.0-beta and migrate the country data.

We have also published a new Time & Expense extension version for 5.0.0 compatibility:

On the Avalara integration: what geopolitical area(s) does it cover? Avalara has at least some countries’ VAT available, but not all their ERP integrations support it.

When Avalara certified the xTuple integration, they recognized our solution with the Avalara VAT badge. This means xTuple ERP supports the international tax scenarios currently supported by Avalara.

xTuple ERP was also certified with these other Avalara badges: 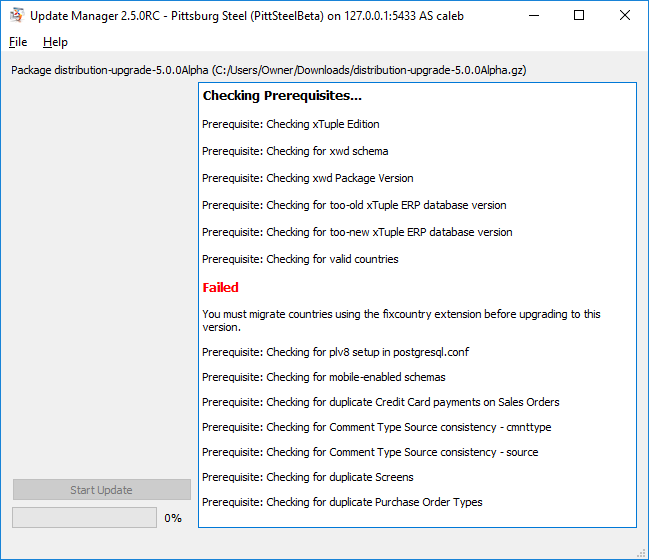 I am assuming that I missed a step. how do I need to change my data after applying the fix country package

After installing the fixCountry extension, you need to actually fix the country references:

[Edit] An updated version of the fixCountry extension has been put on SourceForge and has been attached to the original announcement above.

Important note: Do not click the FINISH MIGRATION button unless you are ready to upgrade the database to 5.0.0 immediately. The updates made by clicking this button make the data incompatible with 4.12.0 and earlier desktop clients

Caleb, were you able to get the 5.0 alpha client to open on Windows. I am still getting the error. Rebecca

Rebecca,
I was able to get the client to open and make a connection to a database. I have not yet been able to update my database. I did not use the Sourceforge link though. I went through Xtuple.org and got the distribution release there

FYI - I was able to open the 5.0Beta client after turning off SSL in the pg_hba.conf.

Using a test machine, test database, test Mac (in other words, fully protected from live data!), I cannot seem to get past the ‘fixcountries’ issue on a 5.0 testbed. All country data is cleaned up and nothing remains in the Query list — but when I try the “migrate” button, it hangs for a few minutes then crashes, suggesting more dirty country data remains. Not sure how I’d find it… suggestions?

We do have some entries in the DB which have a blank/null country, which is actually ‘United States’, but the fixcountry application doesn’t allow me to mod/update those entries.

We’ve made some minor improvements with version 5.0.0-rc of the utility extension (attached below) that might help answer your question.

This is the error screen that appears (see below). We have manually cleaned all the addresses that were previously shown in the fixcountry window. 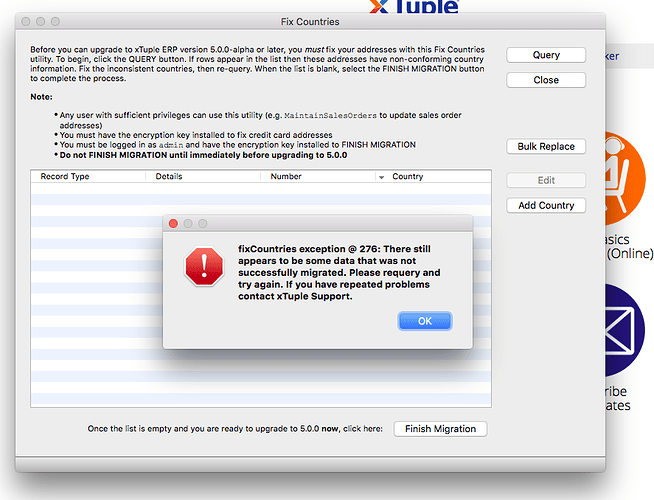 Then I suspect there’s a bug in the way the fixCountry extension handles the metrics table.

I’m guessing this will return 2 rows. If so, make the change permanent:

You should now be able to finish the migration. Let us know either way. If this works then we know to fix the extension. If it doesn’t then we need to look for a different cause.

Re-ran the migration step and got the same error. 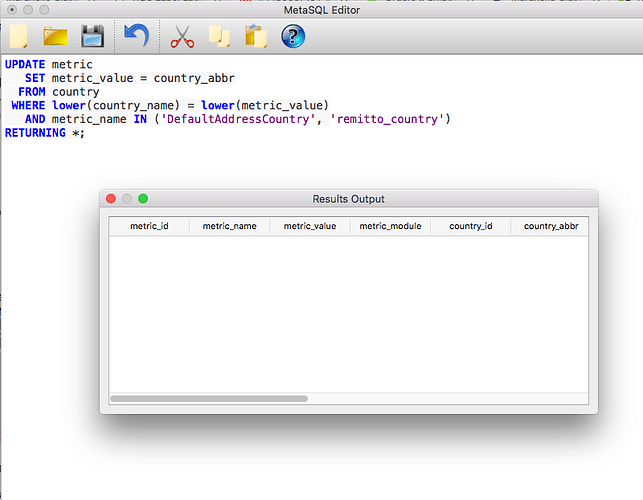 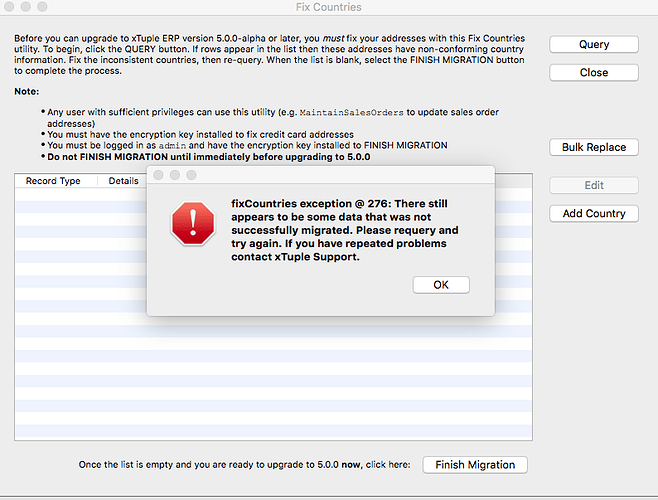 Hey Daniel, I took a look and the package is running this:

SELECT fetchMetricBool(‘ISOCountries’)
What do you get false for that?
Tom

I get ‘FALSE’ on that

Let’s see if any of the countries have a problem or not:
select * from addr
left outer join country on(addr_country=country_name)
where country_name is null

That should find any that do not match exactly what is in the country table.

This is a total sandbox environment. Should I just whack them all to USA defaults via SQL and see if it works?

Select * from country table to get the exact but I think they should “United States”, copy what is in country and update them.
Tom

then…
select * from addr where addr_country = ‘’

But unfortunately the “FinishMigration” wizard still reports an error: 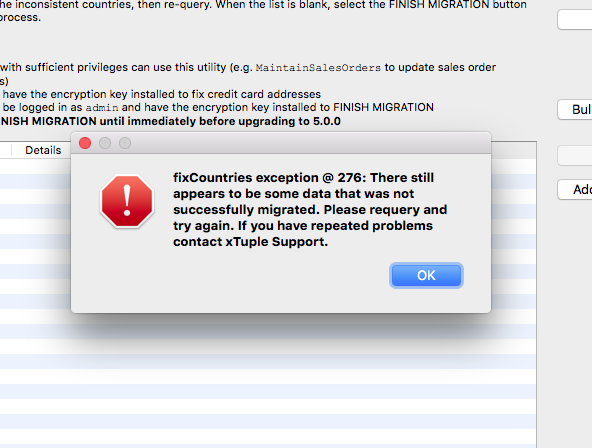 There are really a number of tables in play here, not just addr. It’ll take me a while to figure out where the problem is, as the same MetaSQL statement is used to populate the window and confirm migration success. Somehow the query returns conflicting results depending on context.